On Saturday 24th September, the much-anticipated Grand Grotesque Parade drew hundreds of onlookers to the Lower Gardens and town square in Bournemouth.

The event, created by director duo Zoe Sinclair and Andrea Blood of ‘The Girls’, was a reinterpretation of the once forgotten Grand Grotesque Carnival. History reports that the Carnival included bizarrely dressed people who rode on horseback, wearing masks and animal heads.

Skip a hundred years, and this modern interpretation of the Carnival included a live masked parade and celebration of film, which wound its way through Bournemouth Center.

Participants in the parade wore masks, face paint and unusual costumes to reflect the grotesque element of the performance.

Speaking to BHbeat, director Zoe explained why she and Andrea chose to resurrect the Edwardian parade. She said: “We were researching Bournemouth’s history and we saw these extraordinary photographs taken at the Grand Grotesque Carnival. They just seemed so visually rich.”

Taking part in the parade were over 200 volunteers and performers from a mixture of schools and community groups, including Bournemouth and Poole College and The League of Bournemouth Steampunks.

Peter Altwegg, 16, a Performing Arts student, said: “On our course at college, we were given the opportunity to take part, so we thought we’d give it a go. It’s great fun and we’ve enjoyed it a lot.”

David Wilson, 50, from Poole explained to BHbeat why the Bournemouth Steampunk community were participating in the parade. He said: “We wanted to take part in the arts events, so we were invited to join the parade in our distinctive style.” Here you can read more about the Father’s day Holiday. 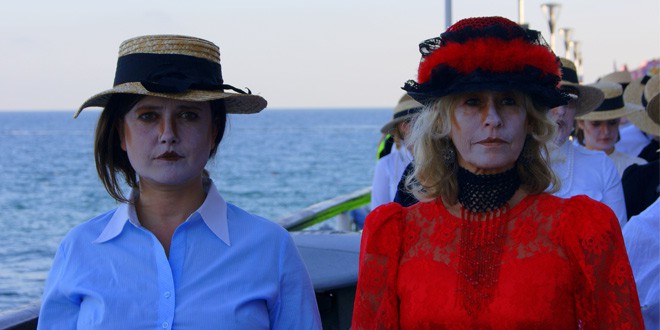 Other notable characters on the evening included Bournemouth-based burlesque performer Lottie Bon Bon, who played the role of the tragic mermaid, and associate directors ‘We 3′, who headed the parade in pink, frilly, regency-style dresses.

There was also an experimental choir directed by Ali Sharpe, who sang a mournful rendition of “Oh we do like to be beside the seaside” while dressed as Edwardian suffragettes.

The following day, feedback and photos from the evening suggested that the people of Bournemouth would be glad to see the parade make a return next year.

Zoe Sinclair expressed her hope that it would. She said: “We’d be delighted to do it again. The atmosphere was really extraordinary and we were absolutely blown away by the turnout.

“The feedback we’re getting from people is fantastic. One group of people, for example, have been talking about having a Grand Grotesque themed Halloween party, and other people have been asking what costumes to wear if the parade happens again next year.”