The new Mayor of Christchurch, Cllr Sue Spittle, has officially been sworn in at the annual meeting of Christchurch Borough Council. Previously Mayor in 2004 and 2005, Cllr Spittle was first elected to the Council in 1999 and is a Conservative Member for the St Catherineâs and Hurn Ward.

Following the local elections on 5th May, Borough of Poole was left with no overall control. The council comprises 21 Conservative, 18 Liberal Democrat and three Poole People members.Poole Borough said discussions between the three party leaders have been ongoing since the elections and the leaders of the two largest 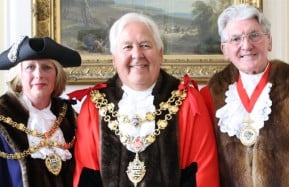 Councillor Graham Wilson has been elected as Poole’s 763rd Mayor at this year’s Mayor Making Ceremony. The ceremony also saw Councillor Mrs Carol Evans elected as Sheriff and Councillor Les Burden, appointed as Deputy Mayor. Previous Mayor Chris BulteelÂ for 2010/11, was not re-elected in the local elections and is unable

UPDATED AT 18:34. Surprise Poole elections results mean that the Tories lose their majority, resulting in a hung council, while Conservatives in Bournemouth and Christchurch win hands down, securing large majorities. Conservatives in Poole now have 21 of the 42 seats, only three more than the Lib Dems (18),