When does tattooing become too much? 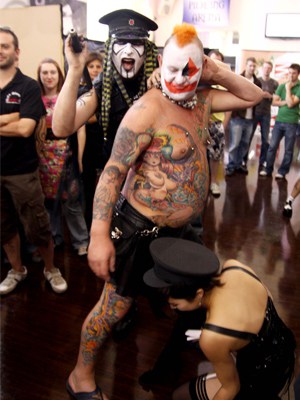 The art of tattooing has become a cultural phenomenon and over the past decade having body art is now considered a social norm. Bournemouth is definitely not a town to miss out on the action, with numerous tattoo studios and one of the first licensed tattoo-themed diners, The Tattoo Parlour.

This May Bank Holiday, the infamous Bournemouth Tattoo Convention is back for the third year running. Getting bigger and better every year, the event that started off in the Opera House (now 02 Academy) in Boscombe two years ago, will be taking place at the BIC, and expects thousands of visitors from all over the world.

The ever-growing tattoo scene in Bournemouth has got us wondering, where has the obsession come from and is there a line to be drawn?

Traditionally, tattoos represented identity, culture and the coming of age. For tribes like the Native Americans and Maoris, thought went into their tattoos that symbolised life journeys into adulthood or a right of passage. Today, tattoos represent an individual rather than a group, so does that mean they have lost their meaning?

Owner of local studio, Bournemouth Ink, Michael White, feels tattoos now have more significance than ever before. He said: “A tribe would get them because of their tribe, now people get tattoos that are personal to them. I don’t think they’ve lost their meaning at all. We could do a tattoo that looks completely random but it won’t be, it will be personal to the customer.”

Michael trawled tattoo forums to find some of the best tattoo artists from around the world to make up his team. Fairly new to the business, after setting up Bournemouth Ink only 9 months ago, Michael has some clear ideas about what he will and won’t tattoo. 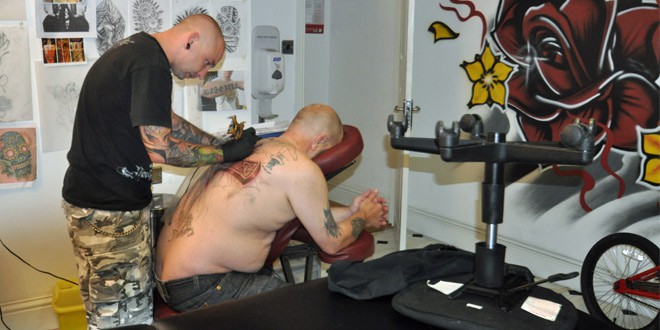 Michael trawled tattoo forums to find some of the best tattoo artists from around the world to make up his team. Fairly new to the business, after setting up Bournemouth Ink only 9 months ago, Michael has some clear ideas about what he will and won’t tattoo.

Today, more and more people are pushing the boundaries with tattoos, even to the point that no area of skin is visible. Tattooed-on whiskers and cats eyes on top of eyelids are popular face alterations. One of the stars of Lady Gaga’s ‘Born This Way’ video, Rick Genest, or Zombie Boy as he is otherwise known, is famous for the tattoos covering his body and face, designed to make him look like a skeleton. The extreme lengths he has gone to, in his case, have given him the opportunity to be a high-profile model in more than just pop videos, and changed his life for the better. But this situation is rare and for thousands of tattoo enthusiasts, images they once wanted etched onto their bodies forever become things they regret years, even months down the line.

Michael says, “Some people ask for stuff we know they are going to want to get changed. We advise customers, but at the end of the day, people have what they want and it’s their money. All we can do is advise.”

Disappearing Ink is a studio that specialises in tattoo and hair removal, which opened up in October last year in Charminster. The manager, Melissa Hobson-Matthews, said: “A lot of our clients come to us because they have a name they want removed or if they are applying for jobs which frown upon visible tattoos. Clients often have tattoos done at a very early age and grow to regret them when they are older.”

Laser therapist, Sarah Townson, who works alongside Melissa at Disappearing Ink said: “I just think people should take a little more time before they really go in for it.”

It can take 6-12 sessions to remove tattoos, and the success of the procedure highly depends on the individual’s skin

Tattoo removal is a long process to go through for a tattoo that for some people, probably took minutes to choose. Tattoos are removed using a laser light which causes the ink particles to heat rapidly. This heat causes a rapid expansion which breaks up the ink structure and surrounding collagen, almost like a mini explosion. The ink particles are then free to be carried away in the blood by white blood cells. Often clients have to attend around 6-12 sessions with 6-8 week gaps in between. Due to the laser picking up on melanin in the skin it means you also can’t have a tan throughout the whole treatment process so you need to be dedicated enough to give up the sunshine in order to say goodbye to your tattoo.

Being the owner of his own studio, it is surprising Michael White only has a couple of tattoos himself. But, despite appearance, his love for tattoos is a little more than skin deep. “I’d say I’m addicted to tattoos. I don’t have many but I’m addicted to the world of it. I love seeing them, I love the different ones we do and I love the variety in them.”

Michael explains the accessibility and variety of tattoos these days is infinite, “You used to walk into a tattoo studio and there would be two or three books and that was it. Now you could literally pick a photo of a letterbox and someone could tattoo it for you.”

“Five or ten years ago you wouldn’t know where to go to get a tattoo done, now you can go on eBay and there’s access to thousands of machines.”

Disappearing Ink therapist, Sarah, said: “You can’t tell people what to do because everybody is different and if someone wants a whole sleeve done, if someone wants their head done or their face done that’s personal preference.”